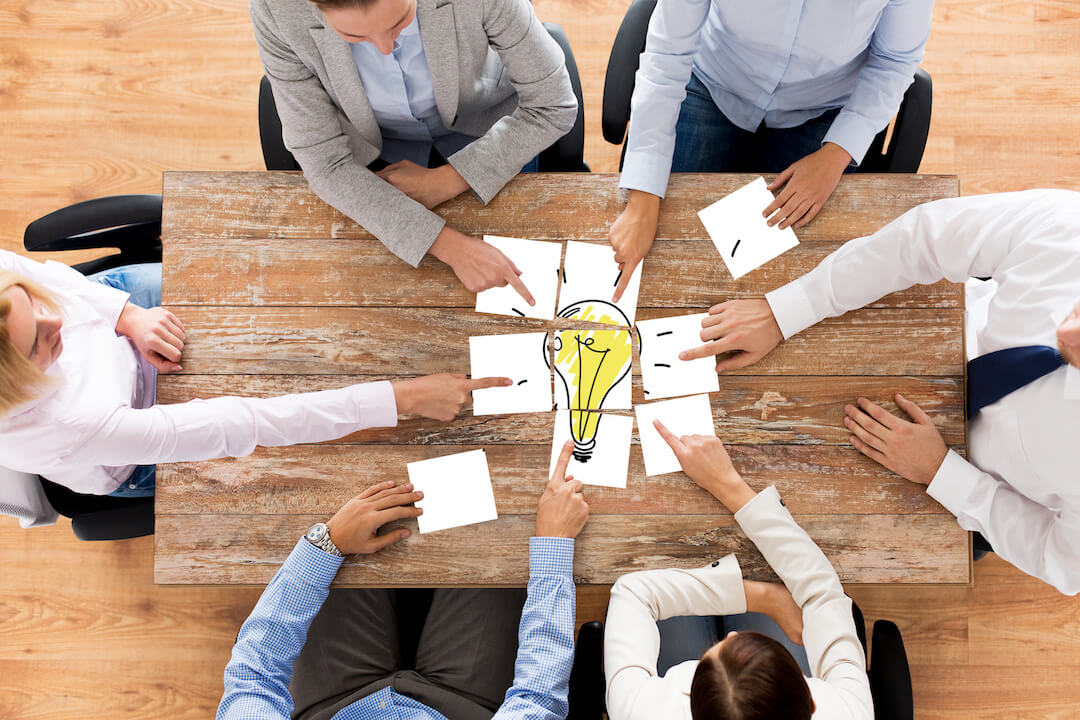 Big ideas change the world. Someone imagines something that didn’t exist before the moment they imagined it. It might not even have a name yet.

Steve Jobs imagined a machine that could do things he hadn’t yet thought of. But every creative idea doesn’t have to be so huge. Game changing is awesome, but solving problems is important too. Just seeing beyond the obvious and connecting dots in different ways can fix or improve things enormously. One inspired idea can have incalculable rewards for your team, your company, maybe even the world.

My job title has always had the word “creative” in it, from “creative director” to “creative lead.” And organizationally, I’ve generally been in the “creative” department. I never thought much about these designations until recently. The implication was that creativity was part of certain jobs and limited to one department.

Today, we know that every person and department must think creatively to survive, and surely to get ahead. The New York Times recently hosted a New Work Summit and the keynote boldly proclaimed, “Creativity Is the New Productivity.” Creative thinking can certainly enhance productivity. The word “hack” attests to that. We all know some unique ways to get around or otherwise enable getting things done.

Collaboration both live and virtual is at the heart of creative solutions. Technology makes this easier than ever before. Everyone everywhere anytime is just a click away from sharing a burst of inspiration and building on it. Team collaboration has been shown to enhance and speed up creative solutions. I would argue that brainstorming frequently has the opposite effect. A brainstorming session is at a set time with set people to come up with something. That can be more stressful than inspiring. But the ability to quickly touch base the moment an idea starts to bubble up, is unbeatable.

The recognition of the importance of creativity as given rise to a whole new school of office design. Creative spaces are collaborative ones. Companies like Zappos do everything possible to increase water cooler moments including designing their campus so that everyone has to leave via the same door. Encounters (or ‘collisions’ as they are called at Zappos) are encouraged. The impromptu and spontaneous is as important, probably moreso, than the scheduled. A scheduled meeting has an agenda (hopefully), so you know what’s going to happen. Not so much with an impromptu collision.

A key challenge to harnessing creativity is the difficulty in harnessing it at all. There’s no one way it happens. Everyone gets there differently. Creative solutions don’t necessarily arrive on time. Noted investor Warren Buffett has a great way of explaining things that can’t be rushed: nine pregnant women can’t produce a baby in one month. Some things just take time. Creativity is one of those things. Yet when an idea does arrive, it seems like it did so in a flash.

Creating on demand is a stressful place to be. But it is possible to set the stage for creative thinking  and to recognize it when it shows up.

6 Tips for Creative Problem-Solving and Thinking

1. Get started.  To get anywhere, you have to be heading somewhere but that doesn’t have to be where you end up. Be willing to arrive at a place you weren’t headed. See where things lead. Welcome detours. Often, that’s where the good stuff is.

2. Don’t over plan. Enthusiasm and momentum are powerful accelerators. Leave room for serendipity and improvisation.  Have a map, but not reservations.

3. Have an open mind. The benefits of thinking “maybe they’re right” opens up a whole other dimension to your thinking. Be willing to change your mind. Welcome it. Find a way to say “yes” to unconventional ideas. It’s easy to say “no” and lots of people in a company have that authority.  Saying yes requires being bold and visionary.

4. Take a nap.  The creative value of a good nap has been proven. That’s why many companies now have nap rooms. The sleeping brain makes all kind of connections you’d not dare make when awake. That’s why I keep a pad nearby. I frequently wake up with problems solved.

5. Trust your instincts. First reactions are unfiltered. After that, we start worrying and second-guessing. Start with what feels right.

6. Failure is a great lesson. Tech companies have a saying, “Fail early and fail often.” Failing early isn’t as bad as failing later, and failing often means you’re thinking of new untested ways to do things. You can’t be truly creative if you fear failure.

So, welcome to the creative team where you’re encouraged to use both sides of your brain.

Jann is a brand strategist and storyteller. She has a unique process to help companies determine their unique advantages and tell the stories that support them.

Recommended Posts
Up Next
Does Your Organization Have Enough IT Resources For Digital Transformation?
Previous
Want to Drive Process Transformation? Start Bottom-Up
Back to Business with Heart <3 Blog Page

When it comes to remote work, it’s not terribly hard to see some of the reasons why employees might prefer it to the office (no commute, more autonomy), but some of the results to come out of this survey are eye-opening, especially when it comes to identifying...
END_OF_DOCUMENT_TOKEN_TO_BE_REPLACED

American employees say that the number one workplace feature they’ll be searching for post-COVID is the ability to work remotely when they please. That’s according to a new study of 2,000 Americans who are currently working remotely, which found that more than...
END_OF_DOCUMENT_TOKEN_TO_BE_REPLACED

If you missed our most recent Transformation Talks: Remote Work in a Post-Pandemic World, check out our top five highlights below and be sure to watch the webinar recording here. We had the pleasure of welcoming Chase Warrington, Head of Business Development a...
END_OF_DOCUMENT_TOKEN_TO_BE_REPLACED

The world is awash in team collaboration tools of every kind—video conferencing software, project management apps, email clients, and chat apps are just a few of the categories that collaboration tools fall into, each one with countless offerings to select fro...
END_OF_DOCUMENT_TOKEN_TO_BE_REPLACED